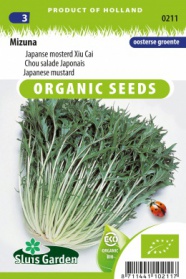 Cultivated in Japan since time immemorial. At a very early stage Mizuna can be prepared in the same way as turnip tops. At a later stage can be eaten raw in salads, cooked as spinach and of course as a stir-fry vegetable. Sow in a greenhouse with cultivation temperature 10-15°C. Later transplant to the garden. As of April can be sown directly in the garden in rows. The crispy leaves have a mild spicy flavour.

Organically grown seeds * This seed has been grown, cleaned and packed according to the organic production method, which has been set by the SKAL Foundation, our number 026035 / NL-BIO-01