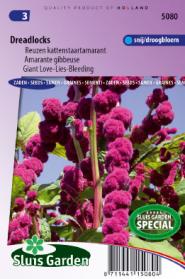 € 2,20
One of the sacred food plants of the Aztecs, Incas and Mayas which almost became extinct. In the 1960s the plant was rediscovered. Apart from its quality as a foodstuff, the Giant Love-Lies-Bleeding with its wonderful dark red, long dreadlocks has great decorative value. Sow directly in the garden in a seedbed, thin out, then later transplant.
0,5 cm
80 cm
35 cm