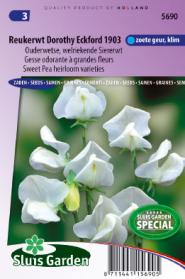 One of the best Lathyrus varieties ever. Immensely popular in the early 20th century. Delightfully fragrant, pure white flowers. Blooms from early summer to early autumn. Was named the best white variety in 1907 and takes its name from the granddaughter of the cultivator Henry Eckford. Requires well-tilled and fertilized soil. Soak seeds for 6 hours before sowing.