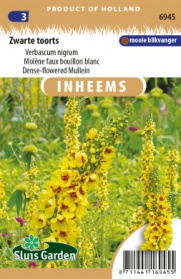 Native of Holland. Also called the “Black Mullein or dark mullein”. Forms high stems with large yellow flower clusters with a red heart, which can be well used as cut flowers. The flowering is mostly middle summer but even after flowering, the black mullein remains an eye-catcher. It is a vigorous perennial plant that can flower for weeks on end. Prefers to grow in not too poor soil and is drought resistant.